Getting a haircut in a foreign country

I have been dreading this haircut from the very moment I had my last haircut in Canada. My hairdresser told me I would at least need to get some sort of trim while I was away. Four months went by until it was starting to get bad. It had grown almost two inches and was knotted into some sort of rats nest every morning. I did the search online for hair dresser recommendations and found a recommendation from someone who also had long curly hair. According to this random, this hairdresser could cut, colour, and straighten curly hair very well. This is exactly what I needed. On top of that, the hair salon was just down the street from my work. I had put it off for another 5 weeks until I had finally had enough. I got up the courage and walked into the salon. The hairdresser was able to communicate with me in English, so I booked an appointment for the upcoming Saturday.

A number of people had posted on the Toytown English forum about wanting hair dresser recommendations and help translating various terms. A few of the replies contained the following unhelpful answer: “it’s just hair, if the hair dresser cuts it too short, it will just grow back”. While there is some truth to that statement, I am going to go ahead and assume those people don’t have curly hair. Because if they did, they would know that if you don’t cut it properly or cut it too short, you are going to end up with a gigantic puff around your face. Growing back the lost hair is a painful experience.
I have had a number of bad hair cutting experiences in the past and I do my best now to rule them out. This has mostly been achieved by only using one hair dresser, even if that means only getting my hair cut in Ottawa. Here’s what constitutes a bad experience, as experienced by yours truly over the years:
-a hair dresser who decides to try their new ELECTRIC hair thinning contraption on your hair and do it small layer by layer despite your disagreement at how much hair they are taking out. I was 12 and this experience still haunts me.
-a hair dresser who has new highlighting caps (when caps were the popular method) and doesn’t compensate for the fact they have not yet been stretched out, therefore allowing the cap to slip up and your highlights to turn out spotted on the top like some sort of cheetah.
-a hair dresser who literally whines the whole time about how thick your hair is, then proceeds to dry it with some sort of wire bristly brush causing an 80’s look, then begins to straighten it with the flat iron and complains it MUST be taking so long because the flat iron she is using is only an inch wide and the flat iron the other hair dressers have is 2 inches wide. Yes, blame your lack of skill on the tools.
These are all signs that your hair dresser has no idea how to cut or style long curly hair and you should probably just leave immediately before it gets any worse.

So the night before my appointment, I had Matt help me look up some German terms to help describe what I wanted as I wasn’t sure how much English she would be able to speak. I also downloaded a number of pictures onto my iPod to illustrate my descriptions. The more detail I could provide, the more likely I would be able to ward off any disasters.

Saturday came and I didn’t need my translated list. The hair dresser understood exactly what I wanted and would double check throughout the cut to confirm my specifications. She cut it, layered it, and highlighted it very similar to my own hair dresser and I was happy with the end result. So here is the rule when finding a new hair dresser, find a good recommendation from someone who has similar hair to you, have a good idea of what it is you want, and take plenty of pictures to illustrate the cut and colour you are looking to achieve.
Here is the final result: 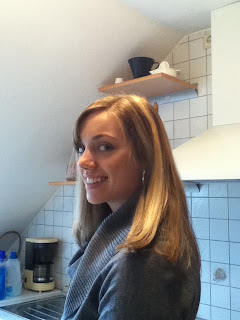 This picture actually makes it look like there is a giant blonde chunk but it's just because it has all fallen over the brown low lights.
Posted by Katie at 22:51

Email ThisBlogThis!Share to TwitterShare to FacebookShare to Pinterest
Labels: Living in Germany